The Great Egret (Ardea Alba) enchants us with its grace. It is a bird of the Pelecaniformes family, very common around lakes, rivers and wetlands.

The Great Egret (Ardea Alba) enchants us with its grace. It is a bird of the Pelecaniformes family, very common around lakes, rivers and wetlands. Measuring between 50 and 90 centimeters, the body can be entirely white or entirely blue; the white egret has a yellow-colored beak, and the blue egret has a black beak. Both kinds have long black legs and a long neck which twists and stretches stealthily in search of food.

You may come across one with lowered head, motionless, as if sleeping, but it is actually stalking its prey. They eat fish, amphibians, rodents, reptiles, insects, and, in a show of intelligence, use pieces of food as bait to attract fish; they are also known to approach fishermen and claim the remains of fish, in some cases even eating directly out of human hands.

Their population is numerous and during mating they bristle their long dorsal egret feathers, which for a long time were used in the production of hats. The females gestate between three and six eggs and mouth feed their young for a few weeks before they learn to fly. They usually live in groups, although they go out in search of food alone; they are migratory, making short journeys or faraway annual migrations to flooded areas. Their large nests are made with sticks in nesting grounds together with various other species of aquatic birds, forming a veritable community.

Here in Brazil they live in the Pantanal region, the southeast and north coasts, and, of course, in our dear northeast, near rivers, lakes and mangroves. In Praia da Pipa, at specific times of the year, we can easily see egrets at low tide, where natural pools form, or at the Guaraíras Lagoon, where they constitute a show of natural beauty. 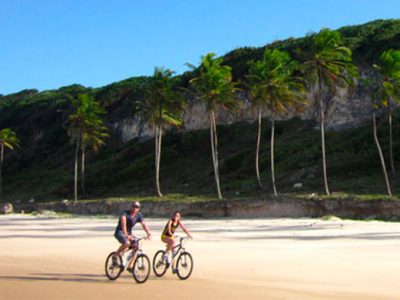